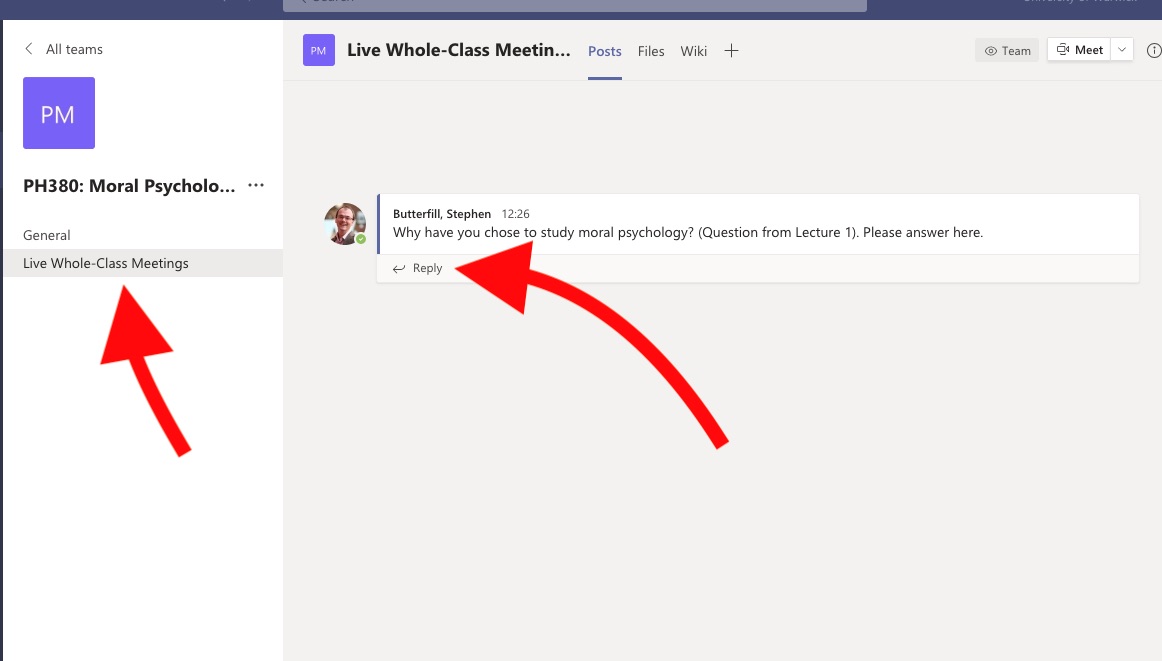 What led you here? Discuss with the person next to you. Most interesting answers on a post it, stick them on the board during the break.
Reason 1: it enables us to better understand human sociality

live in societies roughly as complex as those of social insects

but cooperate with non-kin.

How is this possible?

‘Humans are [...] adapted [...] to live in morally structured communities’ thanks in part to ‘the capacity to operate systems of moralistic punishment’ and susceptibility ‘to moral suasion’

We can see how this might be true, in outline, by reflecting on something called ‘intuitive ethics’
Now we can get a sense of why Richardson and Boyd might think this by looking at in a very brief and preliminary way. One of the leading theories about moral abilities. So according to Hayden, various collaborators, including the anthropologist psychologist Graham.
All ethical abilities rest on what they call intuitive ethics. The idea is that there are five. Actually mainly maybe 4, sometimes 5 basic abilities which are largely separate. And fairly primitive in the sense. That they operate across a wide range of animals that have existed for a long time. So these are abilities too. Respond to cases where there is harm or cases where there is care to distinguish fairness from unfairness. To recognize ingroup loyalty and also to be loyalty ingroup members in a way that you're not loyalty out group members respect for authority, and in some cases. There is thought to be. Abilities linked to purity and sanctity. Now, this last case I put in brackets that I want to get out. That's pretty special case, because you actually only find that in humans. That's a really interesting one, because the theory is that they need for purity and sanctity arises. Inhuman or prehuman history from people starting to have a heavily meat based diet right without having the kind of immune systems that vultures have, so it's very important that unlike a vulture, the human when they're trying to wrestle the meat from the carcass, doesn't do what the Vulture does, right? 'cause the voucher has this very special immune system that allows to allow the vultures put its head up the anus, right? Then humans? That would be extremely bad for them. So the thought is that and their ancestors that evolutionary ancestors. So the thought is that they need this kind of purity, sanctity ability that you don't see another animals which don't have the same.
Background: ‘intuitive ethics’ (Haidt & Joseph, 2004; Haidt & Graham, 2007) claims that there are five evolutionarily ancient, psychologically basic abilities linked to: \begin{enumerate} \item harm/care \item fairness (including reciprocity) \item in-group loyalty \item respect for authorty \item purity, sanctity \end{enumerate}

Haidt and his collaborators claim that: 1. that humans are disposed to respond rapidly to events evaluated along these five lines; (‘We propose that human beings come equipped with an intuitive ethics, an in- nate preparedness to feel flashes of approval or disapproval toward certain pat- terns of events involving other human beings’ (Haidt & Joseph, 2004, p. 56));
2. the first four of these dispositions are all found in nonhuman animals;
3. that these dispositions have an evolutionary history;
4. and that these dispositions provide starting points for the cultural evolution of morality.
For our purposes, let’s suppose they are roughly right.
But let’s exclude purity (which they regard as a relatively late phenomenon, possibly a consequence of the socialization of dispositions linked toward s the shift to a heavily meat-based diet: ‘the human transition to a heavily meat-based diet occurred quite recently (1–3 million years ago; see Leakey, 1994). The move to meat, which may have included scavenging carcasses, coincided with the rapid growth of the human frontal cortex, and these two changes (meat eating and cortical growth) appear to have given humans—and only humans—the emotion of disgust (see Rozin et al., 2000). Disgust appears to function as a guardian of the body in all cultures, responding to elicitors that are biologically or cul- turally linked to disease transmission (feces, vomit, rotting corpses, and animals whose habits associate them with such vectors). However, in most human societies disgust has become a social emotion as well, ...’ (Haidt & Graham, 2007, pp. 106--7)).
You can see how all of these remaining four might collectively be important for living in large, cooperative societies with non-kin.
For example, intuitive loyalty towards ingroup members may be part of a defence against freeriders.
You can reach the same conclusion without buying into the ‘intuitive ethics’ idea. For example, Hamlin writes, on the basis of different arguments (to be considered later), that:

That was human sociality: the idea was that investingating moral psychology is worthwhile because it enables us to better understand human sociality.

Reason 2: it enables us to better understand one aspect of political conflict, and will perhaps even eventually suggest ways of overcoming some political conflicts.
Relatedly, moral psychology matters for understanding why political change is sometimes difficult; especially in democratic societies.
I can’t provide much support for this claim now, and, being philosophers, one of our questions will be whether it is true at all. But I think there is a reasonable case to be made for it.
The idea that moral psychology can help us to understand, and perhaps even to overcome, political divides comes out sharply in research on attitudes to climate change ... 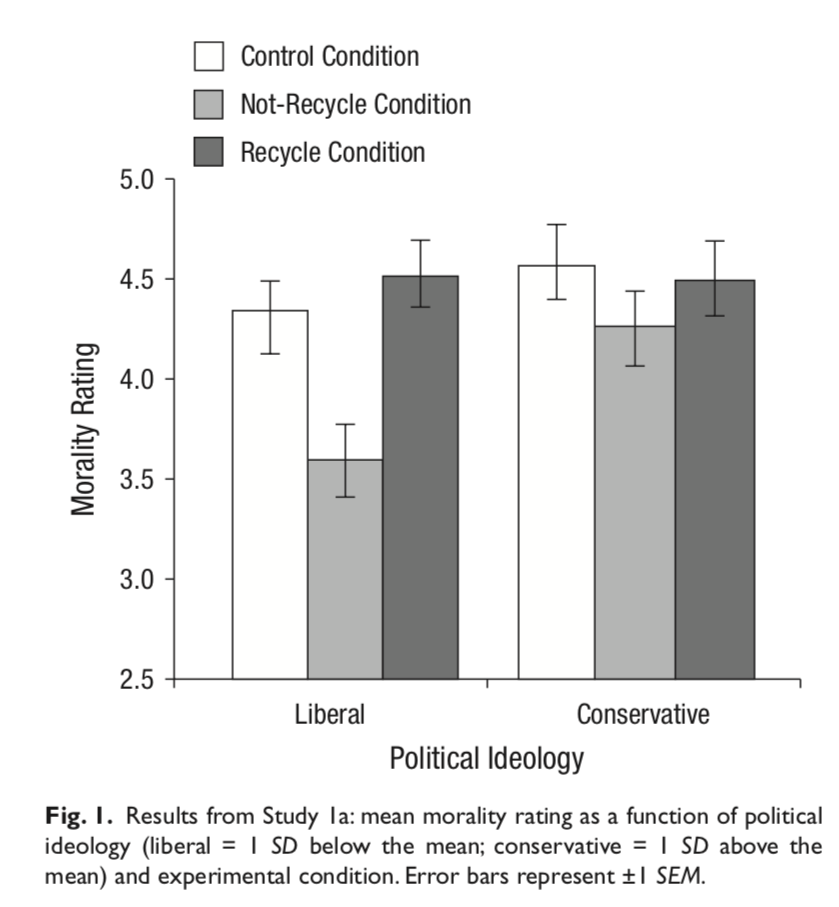 Why are liberals generally more concerned about climate change than conservatives?

It is striking that liberals are generally more concerned about climate change than conservatives. But why should this be?

Why are liberals more likely than conservatives to regard climate change as an ethical issue?

[error bars show SEM (or SE), Standard Error of Mean. (We aren’t going to use that in interpreting the figure; we’re not relying on the graph but on an interaction identified using a regression analysis).]
‘Simple-slopes analyses revealed that more liberal participants (1 SD below the mean) in the not-recycle condition rated the target as significantly less moral (M = 3.59) than did their liberal counterparts in either the recycle condition (M = 4.54), b = 0.95, p < .001, or the control condition (M = 4.31), b = 0.72, p < .001. We found no significant differences across conditions for more conser- vative participants (1 SD above the mean), ps > .15.’
‘participants read one of three vignettes describing an average day of a target individual. The vignettes were identical, describing a day’s activities for the target. The one difference was whether or not, after eating his lunch, the target chose to recycle his plastic water bottle (recycle condi- tion) or throw it away as garbage (not-recycle condition). In the control condition, there was no mention of this bottle. Participants then rated the target on how moral they perceived him to be overall on a scale from 1 (not moral at all) to 6 (extremely moral).’
So maybe the difference is that liberals are more likely to see climate change as an ethical issue than conservatives
This raises another question: Why are liberals more likely than conservatives to regard climate change as an ethical issue?
To answer this question, we need to think about cultural differences.
Recall the ‘intuitive ethics’ idea I mentioned earlier (and which we will critically consider in more depth later in the course).

One of the biggest cultural divides, ethically: liberals vs conservatives.
Typically when we think about cultural differences, we imagine contrasting a society like the US or UK with some very remote place, a place so remote and special that even knowing how to pronounce its name makes you feel special.
But one of the best studied cultural differences concerning ethics involves communities many of us move between every day: social conservatives and social liberals.
According to Haidt & Graham, ‘Conservatives have many moral concerns that liberals simply do not recognize as moral concerns.’ (Haidt & Graham, 2007, p. 99) (Broader issue: cultural variety in the boundaries of morality.)
In particular, liberals have an ethics in which only the first two really matter; they have removed the last three. Conservatives have all five ‘foundations’.
[*todo MOVE what follows]
It starts with observations about a cultural difference.
[Liberals: harm/care, fairness/reciprocity ‘On this definition of morality, conservative opposition to social justice programs appears to be immoral’]
[‘from an anthropological perspective, the moral domain is usually much broader ... ingroup/loyalty, authority/respect, and purity/sanctity. Political liberals have moral intuitions primarily [ignoring these], and therefore misunderstand the moral motivations of political conservatives, who generally rely upon all five foundations.’ (Haidt & Graham, 2007, p. 98) (from the abstract)]
[‘Recognizing ingroup, authority, and purity as moral concerns—even if they are not your moral concerns—is crucial both for scientific accuracy and for the application of social justice research’ (Haidt & Graham, 2007, p. 111)]
[‘Conservatives and many moderates are opposed to gay marriage in part due to moral intuitions related to ingroup, authority, and purity, and these concerns should be addressed, rather than dismissed contemptuously.’ (Haidt & Graham, 2007, p. 112)]
This idea has been advanced by Markowitz & Shariff ...

Why are liberals generally more concerned about climate change than conservatives?

‘The moral framing of climate change has typically focused on only the first two values: harm to present and future generations and the unfairness of the distribution of burdens caused by climate change. As a result, the justification for action on climate change holds less moral priority for conservatives than liberals’

Similarly, you can understand a bit about why nationalism tends to be associated with conservatives rather than liberals (although it varies from place to place).
Ok, that was the second reason for studying moral psychology: it may help us to understand an aspect of political conflict.

A third reason brings us closer to home. Not a few researchers in moral psychology have argued that their discoveries about the psychological underpinnings of moral abilities have consequences for ethics and metaethics.
[Reason 3: according to many researchers, discoveries in moral psychology undermine various claims that have been made by philosophers in ethics; they may also challenge some philosophical methods. (This is going to be controversial.)]

You can see I put a question mark here; I am not convinced they are right. But anyone who studies ethics should at least understand the challenges posed by researchers in moral psychology. And they may well turn out to be right.
[Add something about the question mark missing from the module title: the science of good and evil?]
Some claims made by moral psychologists.

Intuitions are unreliable in unfamiliar* situations

‘Let us define unfamiliar* problems as ones with which we have inadequate evolutionary, cultural, or personal experience.’ (Greene, 2014, p. 714)

Philosophers, including Kant, do not use reason to figure out what is right or wrong, but ‘primarily to justify and organize their preexising intuitive conclusions’

So that was the third reason ...

non-reason: it enables us to better shape our own, individual morality.
Comparison with linguistics changing how you communicate with words. Could happen, but not likely to be a good thing.
Also be aware that there is a high degree of uncertainty here. One of my friends, a professor in the US, has a course called ‘better living through cognitive science’. I think that is a mistake: there is too much uncertainty.
You wouldn't get in a plane on the basis of theories defended by physicists: you rely on engineers and safety standards. And even then, few of us would want to be on the first flight a new type of plane made. We don’t yet have engineers of human moral psychology. Which is perhaps for the best.